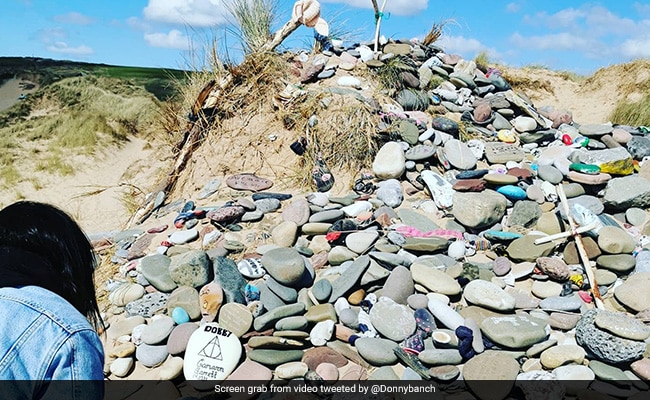 Fans have been leaving trinkets, painted rocks and all sorts of socks at Dobbie’s grave.

Dobby is not only the greatest house elf to ever exist, but many Harry Potter fans consider him of the most best characters in the entire series. So much is the love and adulation of fans, that a grave was created as a memorial in Freshwater West beach at Wales, frequently visited by Potterheads. Apart from being a beautiful location, it is the actual place where those heartbreaking scenes of Dobby leaving the world were shot.

For years, fans have been leaving trinkets, painted rocks and all sorts of socks at his grave. Unfortunately, these fan tributes have now caused an environmental hazard at the film location. While socks posed a huge significance for the fictional Dobby, they are a bad thing to leave at a beach.

See the picture of the grave here:

According to a New York Post report, fans of Harry Potter are now being asked to stop leaving socks at Dobby’s grave in an effort to protect the beach.The growing collection of mementos and painted pebbles is a nuisance and harmful to the area’s wildlife, according to a group that assessed the area as part of an eight-month review of the site. Environmental officials had also considered tearing down the memorial, fearing the beach’s ecosystem would be harmed, the outlet further said. However, they allowed the memorial to stay standing, and only a warning to fans has now been issued.

“Items like socks, trinkets and paint chips from painted pebbles could enter the marine environment and food chain and put wildlife at risk,” the National Trust Cymru, a UK conservation charity, said in a statement.The report added that National Trust Cymru’s Rhian Sula said that the socks end up in the sea, which inevitably become a part of the food chain.

The beloved house elf has been a favourite among audiences since his debut in Harry Potter and the Chamber of Secrets.” Dobby died in Harry’s arms on Freshwater West Beach in one of the most emotional scenes in the franchise. While dying, he said the site is “such a beautiful place to be with friends”.

The Impact Of Imran Khan’s Shooting On Pakistan’s Army, Economy

The Impact Of Imran Khan's Shooting On Pakistan's Army, Economy