When Salman Khan tried to delay Andaz Apna Apna: ‘I harassed them with my broken leg, cut my hair short’

Andaz Apna Apna might be a cult comedy today. But there was a time when Salman Khan tried to delay its shooting. The superstar who played one of the male leads – Prem in the Rajkumar Santoshi directorial, spoke about his rapport with co-actor Aamir Khan, while lauding his performance, in an interview dated 1992.

“Andaz Apna Apna is a hilarious film. It is incredible, the funniest film on Indian screen ever,” Salman said in the interview, the video of which has been uploaded on YouTube by the channel The E Package.

Aamir and Salman’s duo – Amar-Prem have become a benchmark for their histrionics and comic timing. Salman was all praise for Aamir, as the two continue to remain great friends even today. “Aamir is damn funny in the film. He’s a talkative character and got all the funny lines. He’s done his role so well. I play a dumb,” he said.

Salman also revealed that he deliberately tried to break the film’s continuity so that it gets delayed. “The film is coming out in six months. I’m desperately trying to delay the film. I’m not giving them dates and harassing them with my broken leg, I’ve cut my hair short. So the continuity is gone,” he shared.

However, there’s a popular belief that the lead actors of the film weren’t on talking terms during the film’s shooting. Clarifying the rumours, director Rajkumar Santoshi, during an interview with Rajeev Masand on the film’s 25 years in 2019 said, “There were a lot of rumours that Aamir and Salman were not getting along with each other. But the fact was not that. They were very good on the set. On the contrary, they were helping each other a lot. Though we read new reports about a fallout. So many times, after saying their “Aila-Uima” they used to laugh so much they would leave the shot. Like the bomb and bouquet sequence. That’s the kind of friendship they had.”

Santoshi, instead said it was the leading ladies who had issues. “Raveena and Karisma had some tension. But during the shooting, they were totally committed. They weren’t talking during the climax shoot. They had gone to shoot Aatish and while returning, they had some fight at the airport and hence, they weren’t talking. So the scene had them tied up to a pillar. When they wished to tell something to each other, they did that through me, example to keep the rope loose because one had to do a hand movement. I shouted at them to speak to each other directly. When we were changing the lighting of the shot, I asked the crew not to open them till the time they don’t talk to each other,” he revealed. 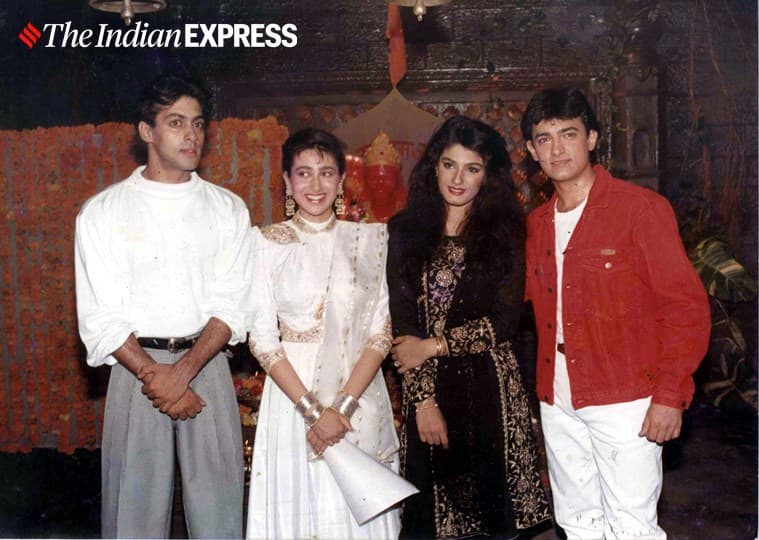 Andaz Apna Apna was a box office flop upon its release back in the day. But the film’s TV broadcast, online streaming and other formats grabbed the fancy of the audience, eventually declaring it an iconic comedy. The film, to this day, remains the most viewed on all mediums, holding an IMDb rating of 8.20.

Talking about the film’s journey, Santoshi told Masand, “The distributor was very new that time. And a lot of people told me it’ll be risky. But I had committed. He released the film when neither Aamir or Salman, nor I was there in the city. We were shooting somewhere. It was not released properly, neither hyped. What kind of a film it is, also wasn’t promoted well. It was different from the conventional love stories Aamir and Salman would do. People were taking time to absorb and understand this. That’s why initially it wasn’t a success. It gained momentum later.”

Over the years, there have been several reports that the makers are eyeing a sequel or a remake of Andaz Apna Apna, with several new actors vying for the lead roles.

Financial Independence, Early Retirement: What To Do In Your 20s To Retire Before 40

Financial Independence, Early Retirement: What To Do In Your 20s To Retire Before 40

Godzilla vs Kong: All that’s happened so far in the MonsterVerse