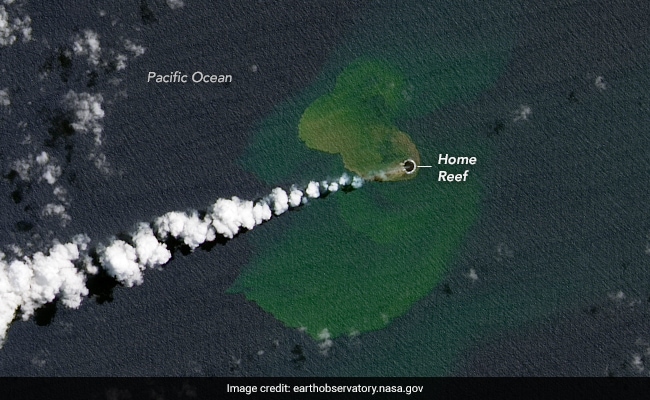 The Home Reef volcano was still erupting as of Monday.

A new baby island has been spotted in the southwest Pacific Ocean hours after an underwater volcano erupted not far from Australia.

Earlier this month, the Home Reef volcano – located in the Central Tonga Islands – started spewing lava, steam and ash, and discoloured the surrounding water. Just eleven hours after the eruption, the new island then emerged above the water’s surface, said NASA Earth Observatory, which captured images of the island with satellites.

As per NASA’s press release, the newborn island grew quickly in size. On September 14, researchers with Tonga Geological Services estimated the area of the island to be 4,000 square meters (1 acre) and the elevation to be 10 meters (33 feet) above sea level. However, by September 20, the researchers informed that the island had grown to cover 24,000 square meters (6 acres).

The US space agency said that the new island sits on the Home Reef seamount in the Central Tonga Islands, southwest of the archipelago’s Late Island. But it also added that the baby island might not be here to stay.

“Islands created by submarine volcanoes are often short-lived, though they occasionally persist for years,” NASA explained.

“An island created by a 12-day eruption from nearby Late’iki Volcano in 2020 washed away after two months, while an earlier island created in 1995 by the same volcano remained for 25 years,” it added.

Also Read | Humans Have Dumped Over 7,000 Kg Of Trash On Mars: Study

Meanwhile, according to a Facebook post from the Tonga Geological Services, the Home Reef volcano was still erupting as of Monday. In a statement, the officials said that the volcanic activities at Home Reef Volcano in the last 24 hours is progressive with 21 volcanic events. But they also added that the volcano’s activity poses a “low risk” to the Aviation Community and the residents of the Vava’u and Ha’apai – the two island groups in central Tonga.

Rupee Recovers A Touch Against A Softer Dollar, But Not Far From Record Low