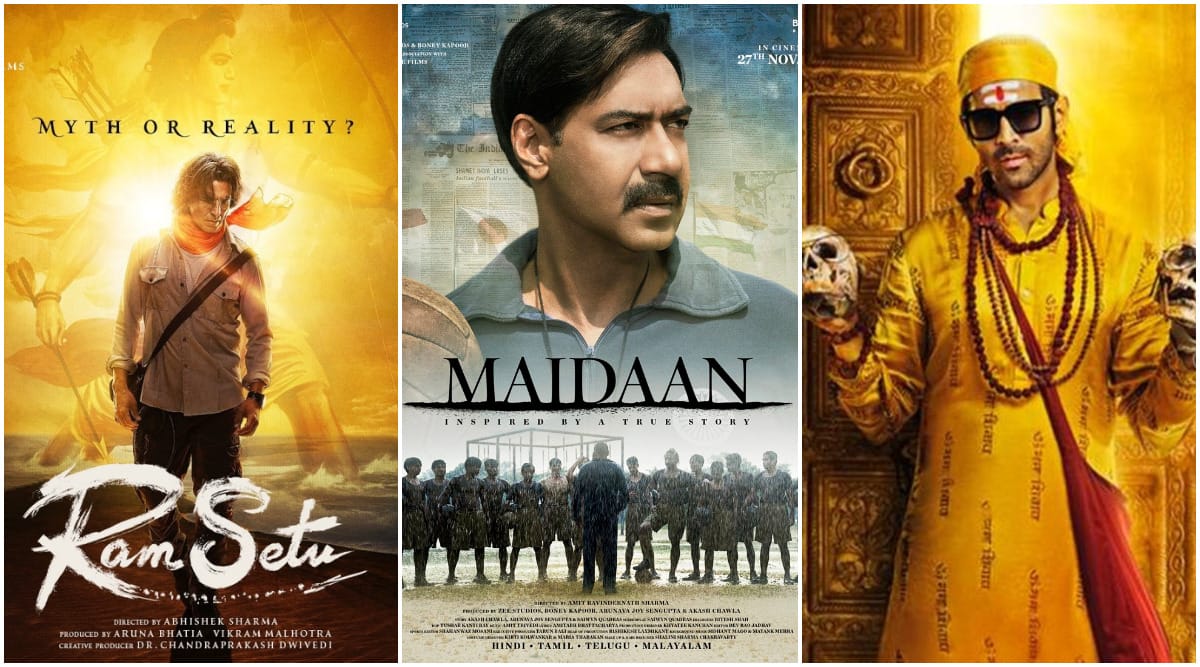 Maharashtra curfew: With film shoots not allowed in the state, Bollywood comes to a standstill

With new restrictions laid down by the Maharashtra government to curb the spread of coronavirus, film shoots that were underway in the state have come to a standstill.

Here is a look at the Bollywood films whose shooting has come to a sudden halt:

Akshay Kumar, Jacqueline Fernandes and Nushrratt Bharuccha started shooting for Ram Setu in March after a muhurat shot in Ayodhya on March 18.

However, after Akshay and 45 crew members contracted coronavirus on the set of the Abhishek Sharma directorial in early April, the film’s shoot was halted as the cast and crew members had to quarantine themselves as a precautionary measure.

The film’s shoot was expected to resume after Akskay’s recovery, but it is now delayed due to the fresh set of restrictions in Maharashtra.

Shah Rukh Khan, Deepika Padukone and John Abraham starrer Pathan’s shooting began in early April. The team wrapped up their first schedule a few days ago and were set to start the second schedule today. However, with the new restrictions in the state, YRF has put the shoot on hold until restrictions on film shoots are lifted.

Another YRF project set to go on floors was Salman Khan and Katrina Kaif starrer Tiger 3, helmed by Ahmed Khan. While the film’s pre-production work had started, there is no clarity on when the shoot will begin, given the curfew-like restrictions in Maharashtra.

Tiger Shroff started shooting for Ahmed Khan’s Heropanti 2 in Mumbai earlier this month, soon after the film’s female lead Tara Sutaria recovered from coronavirus in March. Tiger wrapped up the first schedule of the movie in two weeks. The next schedule of the film now stands delayed.

In early 2020, Anees Bazmee started shooting Bhool Bhulaiya 2, starring Kartik Aaryan, Tabu and Kiara Advani, in Mumbai, followed by a schedule in Manali and Himachal Pradesh. However, following the Covid-19 outbreak, the film was put on hold.

The cast and crew resumed shooting for the film in February this year. But the shoot was halted again as Kartik Aryan tested positive for Covid-19 in March.

Ajay Devgn-starrer Maidaan, a film which revolves around football, was going to be released by the end of 2020. However, due to the pandemic, the film was put on hold last year, and it went on floors in February this year. Following another delay due to director Amit Sharma’s coronavirus diagnosis, the film’s team was preparing to start shooting the film. But with Maharashtra going into lockdown again, the film has been delayed even further.

Om Raut’s Adipurush, starring Prabhas, Deepika Padukone and Saif Ali Khan, too went on floors in Mumbai in February, but it is now delayed, and there is no clarity on when shooting will resume.

The shooting of Gangubai Kathiyawadi, which is scheduled to release on July 30 this year, is still not complete. After Sanjay Leela Bhansali tested positive for Covid-19, Alia Bhatt too contracted the virus. Even though SLB and Alia have recovered, the makers are not sure when they will resume the film’s shooting, given the new restrictions.

A source close to the production team told indianexpress.com, “SLB is known for big sets in his films, and huge sets were erected in Mumbai’s Film City. However, because of the Covid-19 situation in the city, the sets are being unused, and the costs are increasing. While we are very confident that the film is well made and that the audiences will love it, the increase in production costs can affect a film badly.”

Brahmastra has been in the making for quite some time now. First, it was delayed due to budget constraints and then due to the pandemic. This year, the cast had resumed shooting, but the coronavirus diagnosis of Ranbir Kapoor and Alia Bhatt brought the shoot to a halt for a few weeks. And just when the actors were ready to get back on set, the Maharashtra government ordered all film shoots to be halted in light of increasing Covid-19 cases in the state.

Goodbye, starring Amitabh Bachchan, Neena Gupta, Rashmika Mandanna and Pavail Gulati, went on floors earlier this month. However, now the shoot of Goodbye has been put on hold.

The shoot of Shashank Khaitan’s Mr Lele, starring Bhumi Pednekar and Vicky Kaushal, was suspended after both the actors tested positive for coronavirus during the film’s first schedule. Meanwhile, Vikramaditya Motwane’s Andolan Pictures is awaiting a green signal from the Maharashtra government to begin shooting.

Two To A Bed, Bodies Outside Ward At Delhi Hospital Amid Covid Crisis

Two To A Bed, Bodies Outside Ward At Delhi Hospital Amid Covid Crisis