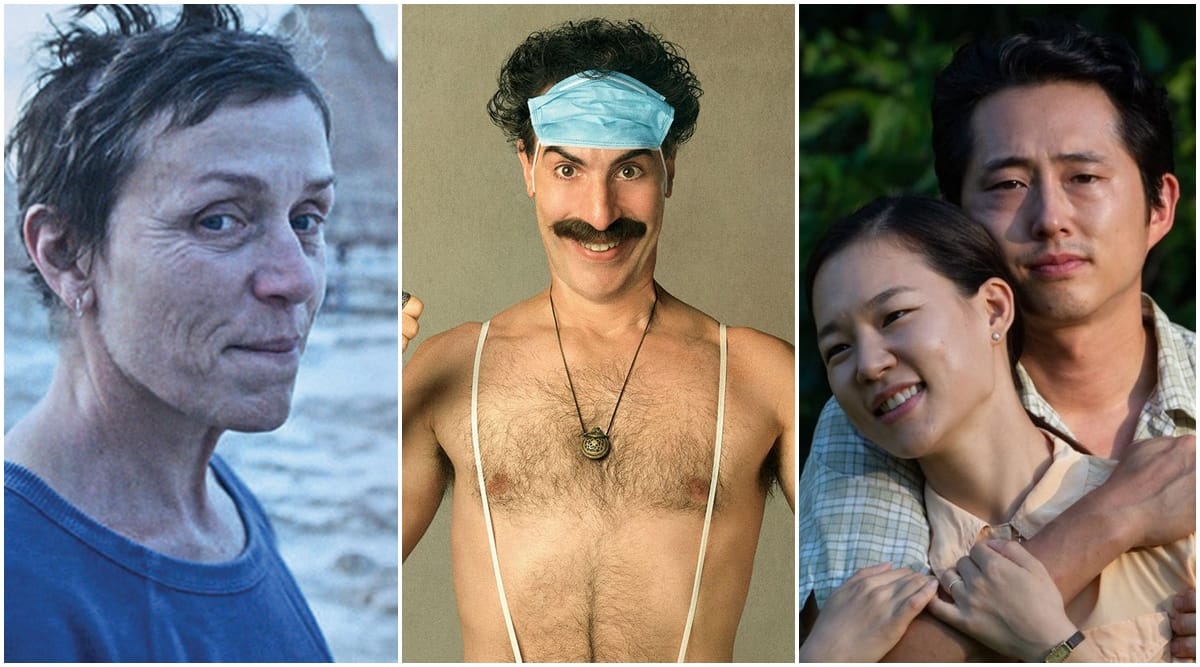 78th Golden Globe Awards will be held on March 1, 2021 at 6:30 am as per Indian time. This time, the ceremony has been delayed by two months due to the COVID-19 pandemic. Bestowed by the Hollywood Foreign Press Association (HFPA), they are usually given out early in January every year. While the Academy Awards or Oscars honour the best in big-screen entertainment or at least the feature film format, Golden Globes cover both television and film.

The ceremony will be held from both Los Angeles and New York with nominees taking part from locations around the world. Tina Fey and Amy Poehler will together host the event from Rainbow Room in New York and Beverly Hilton in Beverly Hills, Los Angeles.

Here are our predictions in the film categories:

Will The Trial of the Chicago 7 take home the award? (Photo: Netflix)

The race is tight here, and honestly, any movie among these could win and nobody would scream “Snub!”. Nomadland is arguably the best reviewed movie here and has also been called the best movie of 2021 more times than any other on the list. Still, we believe The Trial of the Chicago 7 might just end up winning this. Borat Subsequent Moviefilm, easily the funniest movie of 2020, should win the Golden Globe in this category.

While 2020 was full of fantastic individual performances despite fewer number of film releases, no performance can come close to Riz Ahmed’s phenomenal turn in Sound of Metal

Again, an extremely difficult choice. Viola Davis and Frances McDormand are veterans who have proved themselves again and again. But this time, Vanessa Kirby deserves the trophy due to her subtle yet extraordinary performance in a complex role.

Best Actor in a Motion Picture – Musical or Comedy

Sacha Baron Cohen can be so shocking and outrageous that it is easy to forget he is also an exceptional actor. Behind the façade, there is a serious performer who emerges only after multiple viewings of his films. We believe Baron Cohen should take this.

If Borat provided the humour in Borat Subsequent Moviefilm, Maria’s feral Tutar was the heart. Maria Bakalova was utterly convincing in the role and should clinch the trophy.

Sacha Baron Cohen – The Trial of the Chicago 7 as Abbie Hoffman
Daniel Kaluuya – Judas and the Black Messiah as Fred Hampton
Jared Leto – The Little Things as Albert Sparma
Bill Murray – On the Rocks as Felix Keane
Leslie Odom Jr. – One Night in Miami as Sam Cooke

Daniel Kaluuya has garnered a lot of positive buzz due to his performance in Judas and the Black Messiah, a movie that is itself an award favourite. He should win.

Olivia Colman is the frontrunner in this category. The Father may not be as talked about in the awards circles as a few other movies but Colman’s performance has been singled out for praise by many.

It is hard to overstate how much HFPA loves Aaron Sorkin, and hardly undeservingly. He is known for his sharp scripts and snappy dialogue. The Trial of the Chicago 7 was a courtroon drama and was practically carried by its dialogue. He deserves to take this trophy.

There was a lot of good stuff in Mank. One was the score, that was not only era-appropriate but was also worth listening to, independently. Trent Reznor, Atticus Ross should take this for Mank. However, we will not be surprised if Ludwig Göransson pulls off an upset.

An extremely subjective category, we believe “Tigress & Tweed” is the best song among nominees and should win.

The Croods: A New Age
Onward
Over the Moon
Soul
Wolfwalkers

This one is easy. Soul was the best animated movie of 2020, and should win in this category.

Minari is Steven Yeun’s most personal movie, a moving portrait of South Korean immigrants eking out a living in 1980s America. It should win in the Best Foreign Language Film category.

Dos and don’ts for constipation relief, as explained by Ayurvedic practitioners

Dos and don’ts for constipation relief, as explained by Ayurvedic practitioners