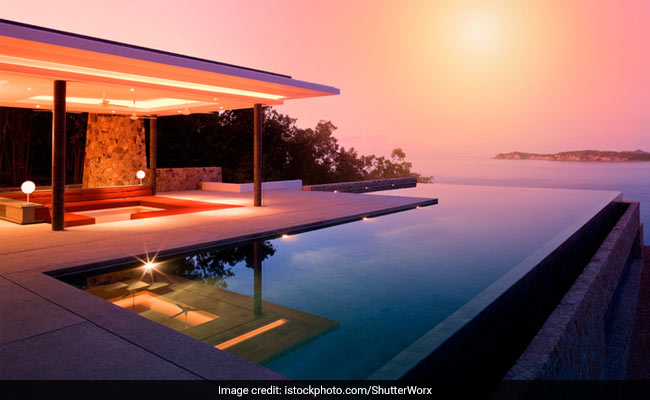 Space is the No. 1 priority for real estate hunters in the pandemic era at every level of the market. But for the rich, that means far more than just another bedroom.

Championship-sized tennis courts (not necessarily for playing tennis), a penthouse bedroom that doubles as a garden and Instagram-worthy wine cellars are just a few of the features real estate agents say the well-heeled are craving.

And even as the vaccine rollout gathers pace, experts aren’t expecting the desire at the top end of the market for a more resort-like experience to ebb anytime soon.

“Covid has made people reassess the life they want to lead,” said Michelle Ciesielski, head of residential research at Knight Frank Australia. “This isn’t going away.”

Here’s a rundown of what’s hot right now in the high-end world:

Sipping a martini by the pool has always been a mark of the good life. And during the pandemic, its allure has only increased, at least for those who are wealthy enough to afford a swimming pool in their backyard.

From 2015 through to the first three months of 2020 (before everyone knew what Covid-19 meant), about 26% of homes sold each quarter in Greenwich, Connecticut – one of the richest places in the U.S. – had a pool. In the last 12 months, that’s jumped to an average of 35% of all sales in a quarter, according to Jonathan Miller, president of appraisal firm Miller Samuel Inc.

“Pools have definitely been a tremendous driver,” said Jason Friedman, who is with Daniel Gale Sotheby’s International Realty and specializes in the gilded north shore of Long Island, New York. People who escaped to the area from the city to rent earlier in the pandemic may now be buying, and private amenities, including of the aquatic sort, are pull factors, he said.

Tent-Ready Tennis Courts
In sunny Australia, where pools have long been essential for the rich, it’s championship-sized tennis courts that are now attracting buyers.

In 2020, super-prime properties with tennis courts sold on average for 22% more than their court-less peers, according to Knight Frank research.

All that demand is not necessarily being driven by a desire to stay fit or a passion for the sport, though.

“It’s a great space for kids to play and to put a marquee in the future for 21st and 40th birthdays,” said Adam Ross, who specializes in Sydney luxury sales for Knight Frank. “It’s a future-proof investment.”

‘Indoor-Outdoor’ Rooms
It’s not only the actual outdoors that have become more important for wealthy house hunters.

Anna Czarnowska of Morpheus London, a high-end residential and hospitality design firm, says demand is rising for indoor spaces that have an outdoorsy vibe.

The most common request during lockdown was for multifunctional space and “biophilic designs” – an approach that attempts to incorporate nature into the built environment, according to Czarnowska. Her team used such principles when building a garden room for a penthouse at Chelsea Waterfront in London. They see the trend continuing beyond the pandemic.

“Even if we are going to go back to normal, I think the fear of these things happening again will remain with us for a long time,” Czarnowska  said. “So everybody would like to have a home that is multifunctional.”

Rickesh Patel, design director at Morpheus, says he is also continuing to see clients ask for such “indoor-outdoor” spaces, particularly in London where garden space comes at a premium. High-end buyers, he says, have been willing to make sacrifices for that outdoorsy vibe. One client who wanted to maximize light coming in from the outside was willing to lose around 150,000 pounds ($206,600) worth of square footage to make space for a big light shaft, Patel said.

All the Toys
With so much more time at home, what’s inside has grown in importance. At the practical level, that means his-and-her studies (not just sinks) are increasingly in demand, says Harri Williams-Jones, a super-prime residential development consultant for Savills London.

It doesn’t stop there. Wealthy shoppers are also seeking amenities such as gaming facilities in cinema rooms for teenagers and private spas.

“The pandemic has just catalyzed the trends that were already emerging ,” said Williams-Jones. “It’s not necessarily an absolute paradigm shift, but it’s just put more of a focus on people’s lifestyles.”

And don’t forget wine. Far from being something you tuck away in the cupboard, it’s now a chance to make an architectural statement with a glamorous room.

Multi-Generational Living
For the ultra-wealthy, having their near and dear close is now worth paying extra for. That means houses big enough to hold parents, grandparents and children – as well as staff quarters – in addition to all the other luxury toys and outdoor space.

Downton Abbey-like country houses – many of which have sat on the market for years – are suddenly a lot more popular. Last year, for instance, wealthy buyers triggered a 1,900% sales surge in British country estates, which have more than enough room for all sides of the family.

“Covid was really the catalyst for it, an excuse to gather together the whole big extended family and go somewhere amazing,” said David Forbes, chairman of the Savills Private Office.

Island Paradise
At the start of the pandemic, there was talk of a boom in Caribbean private islands where the ultra rich could sit out Covid by the beach.

A similar trend is now playing out among the merely wealthy. In Hong Kong, top-end agents report that buyers who previously wouldn’t have dreamed of looking far from Central, the main business district, are starting to hunt for tranquility.

Will Robertson, executive director of Nest Property, says that particularly for those renting, the more serene areas in the city – such as Clearwater Bay or Sai Kung in the New Territories – are growing in appeal.

As well as being one of the few areas in Hong Kong where you can buy a freestanding home rather than an apartment, it feels a world away from the busy city center.

“The accessibility of beaches and hikes often takes greater significance with residents increasingly more concerned about their health and living environment,” Robertson said. “These areas can offer lower-density living.”

The other benefit is the price. In the past two months, the most expensive house sold in the Mid-Levels neighborhood went for HK$136,000 ($17,500) per square foot, while the highest price recorded in the New Territories was just HK$39,000 per square foot, according to data provided by Nest Property.

–With assistance from Oshrat Carmiel.

Covid-19 vaccine: Five healthy foods you can eat before and after you get the jab

Covid-19 vaccine: Five healthy foods you can eat before and after you get the jab